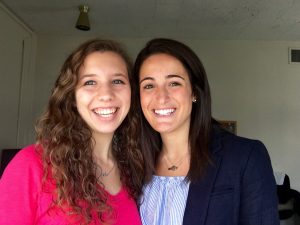 Elder abuse is a growing epidemic that sadly affects one in every 10 older adults. To encourage intervention on behalf of older adults, the New York City Elder Abuse Center believes society must “build an informed, vigorous elder justice workforce to address our systematic shortfalls, gaps in research, and cultural practices of age discrimination.” As part of these efforts, NYCEAC created the Risk and Resiliency Internship (RRIP) in the summer of 2012. Since its creation, the internship has educated 11 undergraduate students about elder abuse issues and how to be advocates for a solution. As the Summer 2017 Risk and Resiliency Internship Program interns, we felt compelled to learn more about the interns who came before us, how the RRIP internship transformed them, where they are now, and how they continue to work to fight elder abuse.

As one of the first interns to work for NYCEAC, Ariana, RRIP ’12, describes her experience as a transformative opportunity. “Prior to my time with NYCEAC, I was rather ignorant about the prevalence of elder abuse and ageism in our society. RRIP provided me with an opportunity to learn from and about a population I had had little experience with before. While I’ve always respected my elders, I hadn’t realized the scope of both their vulnerabilities and strengths. Furthermore, NYCEAC provided me with a deeper sense of self-awareness; we will all care for and be elder adults, so it is imperative that we do more to help this ever-growing population.” After a summer of newfound knowledge, Ariana used her first experience in an office setting to catapult her professional career. She began to apply the skills of professionalism, writing, and communication that she learned through the RRIP internship to other aspects of her life and career.

Melanie, an intern from 2016, has found ways to incorporate elder justice into her everyday life. Said Melanie, “The emotional thrill I first felt after the internship has been replaced by a steadier, more stable, and more lasting interest in promoting its cause. The time apart to process…heightened my interest in older adults, and made me more anxious to see the small ways I can fight ageism in my daily experience.” Although she is not going into a career specifically involving elder justice, she feels that her career as a speech pathologist will give her a unique role in combating elder abuse. She added, “Health care professionals like speech language pathologists have the chance to treat older adults with the dignity and honor they deserve, as well as potentially intervening in unhealthy or dangerous situations. The clientele of a speech language pathologist also has the potential to be especially vulnerable, given that communication disorders might increase their reluctance to report any exploitation. I to take what I learned at the Elder Abuse Center and share it with other professionals in my field.”

RRIP ’15 intern Rachel reflects on her internship experience as a gateway to her work in the medical field. Rachel says she “improved in the areas of verbal and written communication “as I grew comfortable interviewing older adults, asking questions to the NYCEAC staff and affiliated physicians, and compiling several blog entries and newsletters.” Rachel reminds herself of those skills and is applying them every day. Specifically, she is bringing that skill set with her as she begins medical school next week. Rachel is thankful for her time as a RRIP intern and is specifically appreciative of the interaction it gave her with older adults, which will also be incorporated into her medical career. And while she is unsure which specialty interests her now, Rachel does anticipate working with older adults in her career as a physician.

David, RRIP ’16, felt a new appreciation for older adults following his internship experience. In his words, “The internship allowed me to explore and interact with a population I personally felt isolated from, yet in fact has sculpted much of our world as we know it…being an RRIP intern expanded my knowledge and raised my attention to end-of-life issues — and we’ll all be there someday.” Like many of the other RRIP interns, David wanted to apply the practical knowledge he learned to his future career in medicine, where he estimates that nearly one quarter of his patients will be above the age of 65. “As one who plans to pursue a career in medicine, the information I learned is invaluable for detecting and treating elder abuse as a physician.”

As the RRIP interns for this summer of 2017, we feel the same sense of gratitude as the interns before us. The internship provided us with the knowledge and skills we need to grow both personally and professionally.  We now think of ourselves as zealous advocates for the rights of older adults and feel inspired to promote elder justice as we enter the workforce.  As David ’16 advised, we will “internalize how older adults in our society are treated, and become vigilant about the vulnerabilities they face.” We hope to move forward with our newfound knowledge on elder abuse, and use it to work toward finding a solution. We highly encourage undergraduates who are interested and passionate about older adults to consider spending their summer in the ‘Big Apple’ with NYCEAC.