Welcome to the NYC Elder Abuse Center’s (NYCEAC) news and resource roundup blog, The Field Guide. We’ve selected and analyzed pertinent articles and resources relevant to elder justice professionals for January and February 2017. If you would like to share a news item or resource with us, please contact us at info@nyceac.org or via our Twitter, Facebook, or LinkedIn.

Referencing Governor Cuomo’s commitment to preventing elder financial abuse (more on that below), Yahoo News notes the connection between dementia and elder abuse. “Individuals with Alzheimer’s disease and dementia are taken advantage of due to their reduced cognitive ability. Those with dementia may be unaware they are being exploited, and others may be embarrassed or do not want to report a family member, neighbor or caregiver.”

Michael Jackson’s mother, Katherine Jackson, was granted a restraining order against her nephew after accusing him of elder abuse. This high profile story was featured in many prominent news outlets as result making elder abuse front page news.

2017 began with exciting legislative and policy measures seeking to prevent abuse towards older adults (see more below). On the federal level, members of Congress introduced the Senior$afe Act and Senior Financial Empowerment Act.

American Society on Aging Offers Full Access to the Generations Issue, including a Message to the President

The American Society on Aging released its winter 2016-17 issue of Generations, including a message to the President to act on behalf of older adults. This issue includes “fifteen articles that lay out policy plans for the new Administration regarding the economic impact of aging, protecting retirement income, ensuring affordable healthcare, and finding realistic ways to pay for long-term care.” The ASA is offering full access to this issue of Generations.

The SEC approved the new Financial Industry Regulatory Authority (FINRA) rule to protect seniors and other specified adults from financial exploitation. The rule broaders banks’ requirements to have emergency contact information for a “trusted person” as well as banks’ ability to put holds on suspicious activity.

Senator Kirsten Gillibrand (D-NY) introduced the Senior Financial Empowerment Act which seeks to “standardize and improve the way elder financial abuse is reported and establish a national hotline for advising seniors on how to report fraud.”

National Institute of Justice’s Research on the Abuse, Neglect, and Exploitation of Elderly Individuals

The U.S. Department of Justice (DOJ), Office of Justice Programs (OJP), National Institute of Justice (NIJ) is seeking applications for funding for research related to the abuse, neglect, and exploitation of elderly individuals. Research that includes residents of residential care facilities also will be considered. Research proposed may be focused at the federal, state, local, or tribal justice policy and/or practice level. Applications due March 20, 2017.

Elder abuse has roots in ageism. NYCEAC is committed to changing the way aging is perceived.  For more information about ageism and to view additional resources, please visit our Countering Ageism webpage. These are some of the items we read in January and February that confront ageism prejudices.

NYCEAC introduced our first annual Countering Ageism in Film Award highlight the underrepresentation and misrepresentation of older adults in Hollywood. Over 400 community members  voted for the most positive portrayal of an older adult in a 2016 film. Denzel Washington won this contest for his role of “Troy” in Fences.

Building an Anti-Ageism Movement: The Time is Now

Ashton Applewhite contributed this beautifully written piece linking anti-ageism with current movements for social justice. “Ageism is the perfect target for collective advocacy because it affects everyone. That very attribute, its universal nature, means that we undermine ageism when people of all ages show up for stuff. It’s that basic.” 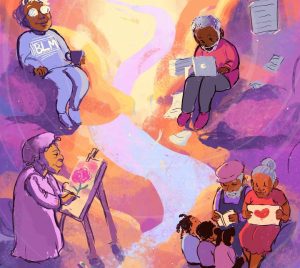 Another article notes the intersection of ageism and current social justice movement. This article specifically correlates the need for countering ageism in the Black Lives Matter movement. “The eradication of ageism is important for thriving Black lives and free Black futures.”

4 Responses to The Field Guide: News and Resources for Elder Justice Professionals – March 2017