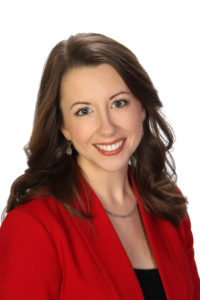 Elder financial exploitation can be just as deadly as other forms of elder abuse, even if the full scope of harm is unreported and often invisible. Few people know that better than Karen Webber of Webber CPA, PLLC, one of the nation’s leading forensic accountants in the elder justice field.

Webber has led the way in educating law enforcement and adult protective service agencies about the intersection of forensic accounting and elder justice, developing and sharing tools to investigate and stop the financial abuse of older adults.

“Just as many social workers likely never had to take an accounting course in college, accountants likely never had to take a social work course,” Webber said. “But when these two very different fields come together and share their expertise on financial exploitation cases, magic happens. I mean real, life-changing action takes place for financial abuse victims, and we love participating in making it happen.”

Elder financial exploitation, or financial elder abuse, is the improper use of an individual’s funds, property or resources by another person, and it frequently occurs with other forms of physical abuse or neglect. Older adults may have assets or steady sources of income such as social security. But as their physical and mental abilities decline due to aging or illness, they typically are not be able to handle their finances as well as they used to – and exploiters take advantage of these circumstances.

That can mean almost anyone – a family member, friend, caregiver, new acquaitance, phone solicitor, anyone with fiduciary responsibilities, or even people helping around the house, like a plumber or a handyperson  –  if greedy, inclined and with access, can try to do nefarious of things, like steal cash, jewelry or other valuables, use a debit card or checkbook without permission or even live with the elder without paying expenses. It also can involve extortion, scams, identity theft or transfers of property from real estate to vehicles and weapons.

Webber began her career at Monroe Community College with an associate degree in business administration with a focus in accounting. She went on to graduate with a Bachelor of Science in accounting and a master’s degree from the SUNY College of Brockport’s debut forensic accounting program. At 28, she was elected the youngest woman president of the college’s alumni association, and a year later, she became the youngest woman ever elected to the Board of Governors of the Genesee Valley Club, a formerly men-only social club started in 1885.

During her graduate program, Webber worked as an intern at Lifespan of Greater Rochester, which serves older adults in upstate New York. She saw social workers working on cases of financial exploitation of older adults but not being able to interpret banking activity or investment accounts to investigate them.

That’s where Webber and her forensic accounting skills came in. Forensic accountants are usually certified public accountants with training on everything from basic personal finance — how to read bank statements and investment account statements — to complex real estate transactions. Red flags include negative cash flow in one or more accounts, increasing monthly/annual withdrawals over time, transfers to/from unknown accounts, and inconsistent or suspicious signatures on checks.

“The work was really awesome,” Webber said. “I sifted through hundreds of pages of documents and figure out how much money was taken, who did it, and how they did it. I was using my skills and education to really make a difference for people.”

Webber continued to work with Lifespan after graduation on nights and weekends and joined a regional public accounting firm’s forensic and litigation services division. She moved up to supervisor and developed relationships with the New York City Elder Abuse Center, among others. In 2015, at age 27 and inspired by her husband starting his own law practice, she established Webber CPA.

At the time, most district attorney offices in New York State had no forensic accountants on staff, and adult protective services case workers often lacked the education to investigate financial abuse cases or the resources to hire outside forensic accountants.

Webber began educating law enforcement and adult protective service agencies about what forensic accountants do and the value they provide. She also helped build tools — one more victim-focused, one more perpetrator-focused — to help them investigate financial abuse cases nationwide. 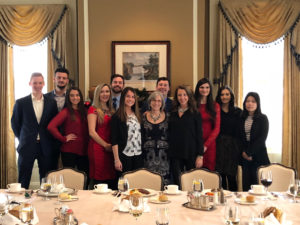 Her team, which has grown to seven full-time staff members, worked with the state Office of Children & Family Services Bureau to develop and pilot FEIST— Financial Exploitation Investigation Suite of Tools— to assist case workers at adult protective services sites. The tools contain eight steps and three decision points, along with a stand-alone form called “When and How to Refer A Case to a Forensic Accountant.” The FEIST pilot is in its final stages, and the tool is expected to be released  this spring, Webber sai

Her firm also worked with the US Department of Justice and the International Association of Police Chiefs to develop and pilot the SAFTA tool — Senior Abuse Financial Tracking and Accounting — to assist law enforcement with investigations nationwide. The SAFTA tool, also still in development, is expected to be available on the University of Southern California’s Elder Abuse Guide for Law Enforcement (EAGLE) site.

“Between the two [tools], users have what we hope to be a comprehensive guide to investigate cases,” Webber said. “Feedback so far has been largely positive, and we really expect the use of these tools to extend beyond APS and law enforcement, and even beyond elder fraud cases.”

The firm’s primary role in financial abuse cases is case analysis, which Webber says involves taking boxes of financial records and turning them into a short report about the “who, what, where, when, and how” of a case. Her team’s work, which today extends internationally to the United Kingdom, also includes : 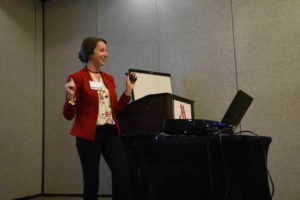 For her achievements to date, Webber was named a finalist earlier this year [January 2019] for the 2019 ATHENA Young Professional Award. The award, announced by the Greater Rochester Chamber of Commerce and its Women’s Council affiliate, recognizes emerging female leaders who demonstrate excellence, creativity, and initiative in their profession and serve as role models to other women.

She also was previously featured in 2017 as a “Woman to Watch” in Rochester’s Democrat & Chronicle. Nannette Nocon, a financial advisor, nominated Webber, noting “her entrepreneurial spirit, the value of her work to the elderly, mentorship of women, success before her 30s as well as her volunteer work for various not for profit organizations including SUNY Brockport, her alma mater.”

“While progress has been made, there is more to do,” Webber says. The biggest obstacles faced by forensic accountants in elder financial abuse cases are access — and timely access — to records, which is limited by the cooperation of victims and financial institutions. Even then, requests for financial records sometimes take months to complete, she says, even as victims continue to be exploited or face difficulties such as unpaid bills, evictions or mounting health problems.

Law enforcement and social service agencies, for instance, often do not realize that criminal statutes apply if someone with a power of attorney is accused of stealing money. They need to make investments in transactional analysis technology and services to handle the increasing volume of cases, Webber says. They also need to shift caseloads to give investigators more time to build rapport with victims, if possible, gather preliminary information, subpoena additional documentation, and analyze it well enough to understand what happened and how.

“The financial exploitation cases we receive are never easy, and neither is owning a business,” Webber said, “But I wake up every day knowing that what we do makes a real, tangible difference in the lives of older Americans and in the work of the justice professionals who serve them. I can’t imagine a better career.”

Webber advises that, “Education, awareness and planning are the keys to prevention in all areas of abuse. Make sure proper end-of-life planning has been discussed and completed (e.g. wills, POAs, healthcare proxies). Preventative technology such as SilverBills can automate and track payment of authorized bills, while account monitoring solutions like EverSafe keep an eye on banks, investment accounts, credit cards, and real estate records.”

If you suspect elder financial exploitation, it’s important to contact the local police and Adult Protective Services. Keep an eye out for these signs with your elder family member or friend:

-Written by the Elder Justice Dispatch Team – and special thanks to Karen Webber for sharing her story!