This blog features a round up of elder justice related news items released in January 2014.

In an interview with Healthline, U.S. Assistant Secretary for Aging Kathy Greenlee discussed why there has been a growing trend of older adults being victimized. “Compared to other social movements, you have survivors who have led the charge. For the elderly, that’s not the case,” Greenlee said. “These people are frail and often have cognitive impairment. It’s the rest of us who need to raise the voice for them.” Healthline cites the New York State Elder Abuse Prevalence Study conducted by Weill Cornell Medical College’s Division of Geriatrics, Lifespan and the NYC Department for the Aging.

Officials warn of financial exploitation through power of attorney

Officials are advising that older adults should have an elder care lawyer to write their power of attorney. In some cases, the power of attorney has been abused in order to steal money from vulnerable elders. “Just signing a power of attorney form doesn’t give you the protection you need,” said Nathan Brooks, an assistant district attorney. “You need to make sure that power of attorney is narrowly drawn so that person’s duties are very narrow. If you just want them to pay your bills, it needs to be said in there.”

A Caregiver’s Guide to Managing Someone Else’s Money

With millions of Americans acting as fiduciaries for loved ones, the Consumer Financial Protection Bureau (CFPB) has created four, easy-to-understand caregiver guides called Managing Someone Else’s Money, in conjunction with the American Bar Association Commission on Law and Aging.

The physical abuse, neglect and financial exploitation of elders, is “America’s dirty little secret,” said said Joe Snyder, director of older adult protective services at the Philadelphia Corporation for Aging. This article tells the story of the abuse, theft and neglect of vulnerable adults in Philadelphia. One study features the abuse of an older adult, 69-year-old Frances Lowry was neglected by her caregiver and nephew, who also stole $7,500.

The American Society on Aging is encouraging advocates to go on record in support of Administration on Aging’s Assistant Secretary Kathy Greenlee in her goal to address and end elder abuse. The ASA will display the name of everyone who signs at the National Forum on Elder Justice during the Aging in America Conference.

A nurse at the Hudson Park Rehabilitation and Nursing Center on Northern Boulevard in Albany has pled guilty to charges that include endangering the welfare of a vulnerable elderly person. Authorities say Sarina Francis, 36, grabbed an older adult by the wrist and twisted her arm, causing a fracture.

Doormen In NYC Called Upon To Recognize Elder Abuse 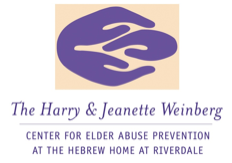 The Harry and Jeanette Weinberg Center for Elder Abuse Prevention at the Hebrew Home in Riverdale’s program that trains doormen to be aware of signs of elder abuse and exploitation continues to be covered in the press, with articles in The Huffington Post, and USA Today.