“Protecting society’s vulnerable is a moral and civic duty that can only be accomplished by breaking down barriers between professional disciplines, mobilizing communities to get involved, and creating comprehensive and coherent policy. Among our greatest challenges as a nation today is making America a safe place to grow old.”
– Lisa Nerenberg 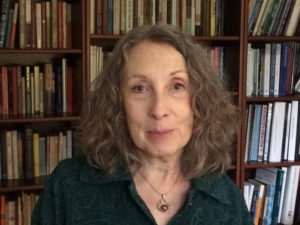 As World Elder Abuse Awareness Day approaches on June 15, our thoughts continue to turn to how we can move the conversation around aging and justice forward in new and innovative ways. Lisa Nerenberg, Executive Director of the California Elder Justice Coalition (CEJC), has been part of that critical conversation for decades. For this blog, NYCEAC interviewed Lisa to get an inside look into her writing and thought process on her new book, Elder Justice, Ageism and Elder Abuse (Springer, 2019), which offers a roadmap for promoting individual rights and social justice in aging policy and programs.

A consultant, instructor, author, and advocate in elder justice, Lisa teaches classes in elder abuse, gerontology, and ageism at City College of San Francisco where she also helped develop the newly launched Elder Advocate Community Health Worker certificate program. She was the founding director of the San Francisco Consortium for Elder Abuse Prevention at the Institute on Aging, which piloted the nation’s first elder abuse multidisciplinary team and other widely-replicated services, and has lectured and provided consultation, training, and technical assistance to organizations and professionals around the world. She also has testified before Congressional committees, served on governmental advisory panels, and spearheaded local, state, and national initiatives. 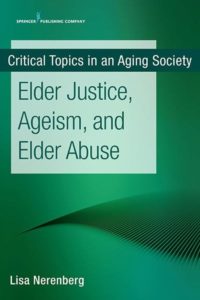 NYCEAC: What led you to write your new book?

LN: Over the years, elder abuse had been framed as a medical syndrome, a caregiving issue, a form of domestic violence, a public health issue, and more. When the Elder Justice Act was enacted in 2009, it reframed elder abuse yet again—this time asserting that living free of abuse was a right. That reframing came at a good time for those of us in our field who were increasingly encountering challenges to rights and justice that ranged from overreach by guardians, to ageism in housing and lending, to inequities in access to the justice system and critical services. I wanted to go beyond the EJA’s limited focus on preventing abuse to apply the lens of social justice and human rights more broadly to aging policy and practice. It’s what I call “elder justice writ large.”

NYCEAC: Why is it important now?

LN: The 2016 election brought human rights and social justice into sharp relief. We saw women reasserting their reproductive rights, children demanding the right to be safe at school, the Black Lives Matter movement, and a backlash against immigrants. People are arguing passionately about whether health care is a right. I believe that older Americans and their allies can make an enormous contribution to the national dialogue. That includes highlighting ageism and how age impacts other forms of discrimination.

NYCEAC: You’ve said that age acts as an intensifier of other “isms” and interacts with them through the process of “intersectionality.” Please explain what you mean.

LN: “Intersectionality” refers to the cumulative impact of injustices. There’s no doubt that ageism in the workforce, housing, and health care are intensified when you add sexism, racism, classism, and other “isms” to the mix. Their impact also accumulates over time, heightening the risk for premature death, disability, poverty, and elder abuse and neglect. Our network needs to understand that we can’t prevent abuse without addressing the “isms.” Conversely, the broader social justice movement can benefit by understanding the cumulative impact of injustice across the lifespan. Advocates for the rights of women, immigrants, the LGBTQ community, people with disabilities, and others also need to better address the special needs of their older constituents.

NYCEAC: What are the core principles of elder justice?

LN: CEJC has articulated principles of elder justice that we’ve posted on our website for others to use. The right to live free from abuse tops the list. But they also emphasize equity, both intergenerational equity and equity among elders. We in elder abuse prevention are often pitted against child welfare programs for protective service dollars and against women with children for domestic violence resources. These imposed rivalries are destructive and need to be replaced by “across the lifespan” approaches to allocating resources.

Some in our field are aligning with groups like the Social Services Block Grant Coalition, which advocates for protective services for people of all ages. We need more of that. Glaring disparities also exist within the older population in terms of access to resources and opportunities. These largely result from discrimination experienced earlier in life, and special efforts are needed to mitigate the impact.

NYCEAC: Could you please give an example of disparities that exist in access to elder justice?

LN: Clearly, financial abuse victims are much more likely to recover losses if they can afford lawyers to represent them. But even in our public systems, where we expect to see equal access, there are inequities. For example, in California, we have a relatively high threshold for losses for felony abuse even though relatively small losses can be devastating to the poor.

NYCEAC: You write that some abuse prevention policies and programs have been criticized for being ageist, paternalistic, or antithetical to human rights principles. Do you agree with that assessment? Why or why not?

LN: The patterning of elder abuse response systems after approaches designed to protect children has certainly fueled these criticisms. At the core are tensions between protecting autonomy and security, which may be at odds. Whereas failing to protect can lead to tragedy, overprotecting can lead to gross infringements on individual rights. Constitutional scholar Nina Kohn warns against relegating older people to second class citizenship status by second guessing their choices and offers guidance in how to evaluate reporting and guardianship laws from a constitutional perspective.

NYCEAC: You lay out an Elder Justice Agenda in the book that summarizes recommendations for practice, training, policy, public awareness and engagement, and research and suggests steps and actions for getting started. Could you please briefly explain the main points of the agenda?

LN: Essentially, the agenda infuses elder justice principles into each of those realms. While that may sound ambitious, the agenda draws heavily from what’s already been done. For example, it draws from the excellent work of advocates around the world who are working toward an international convention (a treaty) for the rights of older people. It employs the ecological model used in public health to highlight interventions at the individual, interpersonal, community, and societal levels.

Outreach focuses on engaging people of all ages in promoting elder justice. That requires combatting divisive “generations at war” narratives. An example is dispelling the belief that programs like Social Security are “aging programs,” when, in fact, the young have an enormous stake in the program’s survival. Conversely, older people need to understand that they have a stake in the success of the young and immigrants, who play such a critical role in caregiving and upon whom our Social Security and Medicare trust funds depend. Elder justice is essentially about the rights of everyone who aspires to live a long and healthy life.

-Written by the Elder Justice Dispatch Team – and special thanks to Lisa Nerenberg for the conversation.

To purchase a copy of Elder Justice, Ageism and Elder Abuse, click here.

For any inquires, Lisa Nerenberg can be contacted here.