When “Amour” Leads to Elder Abuse: Portrayal in Film 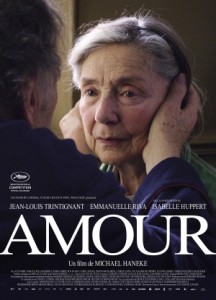 In the 2013 Academy Award-winning film, Amour, writer/director Michael Haneke explores the complexities of love, isolation, caregiver burden and elder abuse within the context of the intimate and long-term marriage of an elderly French couple, Georges (Jean-Louis Trintignant) and Anne (Emmanuelle Riva).

Set almost entirely in the confines of their upscale but dated apartment, the movie’s opening establishes the couple as devoted and cultured, following them to a classical music concert and back home. The morning following the concert, the couple prepares breakfast, engaging in what appears to be the slow, familiar rhythm of their lives together. But this routine is irrevocably and permanently altered when Anne momentarily enters a dazed state at the breakfast table. This episode is revealed to have been a stroke, which, after complications, leaves Anne paralyzed on her right side. The film becomes a portrayal of Anne’s fierce, determined efforts to retain some semblance of independence and cope with her physical limitations, with Georges assuming significant caregiving responsibilities without support from family, friends or a medical team.

When Anne suffers a second stroke, leaving her incapable of talking, eating without assistance, operating her wheelchair, or even brushing her hair, she descends deep into despair. As a result, she tries to kill herself by refusing to drink fluids. Georges, whose devotion has not faltered in the many months of caregiving, attempts to cajole Anne into drinking. After her continued refusal, he grows frustrated and slaps her. Georges’ deep, instantaneous regret is palpable, but this moment represents a major shift in course. Shortly thereafter, Georges attempts to soothe Anne’s incoherent cries of pain by recounting a moment from his childhood. As he concludes the story, Georges reaches over and smothers her with a pillow.

Given the two prominent moments of physical violence in this film – the slap and Anne’s death – there is an obvious interest in the narrative of this film from the perspective of elder justice. The NYC Elder Abuse Center defines elder abuse as, “a single or repeated act…which causes harm and risk of harm… within any relationship where there is an expectation of trust.” 1

The inherent trust between Anne and Georges, and the violation of this trust through the use of physical force, open Georges’ actions to analysis through the lens of elder abuse. Although Georges slaps Anne out of frustration, the harm that it caused, as reflected on her face, was a clear indication that he abused his power over her. But was his killing her also abuse – or an act of compassion? Was Georges responding compassionately to Anne’s twice expressing a desire to die, once before her second stroke and then again after her refusal of fluids? Do these expressions in those specific moments in time mean she still wanted to die at the later point in time when Georges kills her?

Margaret Pabst Battin, a renowned leader in bioethics and Professor of Philosophy at the University of Utah, has spent the majority of her career advocating for patients’ right to physician-assisted suicide. After her husband, Brooke Hopkins, became a quadriplegic, her work took on a different level of personal significance. Battin has a new understanding of just how difficult it is to come to the decision to end one’s life – and how difficult it is for a caregiver to understand the meaning behind the request. In a recent article by Robin Henig titled, “A Life or Death Situation” in The New York Times Magazine, Battin explains that before the cycling accident that disabled her husband, Hopkins expressed no interest in living with machine assistance or other invasive interventions and had signed health care directives indicating such. However, since the accident, Battin has witnessed her husband accept invasive treatments, modify past directives and fluctuate frequently in his desire to end his life.

This personal experience has not shaken Professor Battin’s conviction that each person should have the right to choose death if competent to make that decision. However, Hopkins has “expressed a desire not to abandon [his wife],” meaning he does not want to abandon Battin through choosing death. This has taught Battin that end-of-life decisions can be influenced and complicated by external relationships. In light of these personal experiences, Battin states that, “she remains committed to two moral constructs in end-of-life decision making: autonomy and mercy. Only where both are operating – that is, where the patient wants to die and dying is the only acceptable way for the patient to avoid pain and suffering – is there a basis for physician-assisted dying.” 2

Georges did not involve a physician in the decision, so Amour is not directly addressing physician-assisted suicide. But still, the movie does grapple with morality, which is the focus of this blog. Did George’s action combine both of these moral constructs, autonomy and mercy? The answer depends on the interpretation of Georges’ motives and Anne’s ability to express any sort of meaningful consent.

Haneke’s skill as a writer and director in concert with Riva and Trintignant’s gifted performances make these points of rich debate, complex and weighty just as they are in real life. It is important, though, to take a step back from this debate and examine the circumstances that precipitated Anne’s death. Georges appears to feel that he has been left with no other choice. He has been coping entirely alone with the physical and emotional stress of caregiving. The couple’s daughter, Eva (Isabelle Huppert), is essentially absent. The few visits she makes have a distinctly unwelcoming nature, indicative of some painful episode in the past. In an interview with HitFix, Haneke commented on the broader implications of this dysfunctional relationship: “We live in a society when we’re quite busy in our working lives and it’s the family life that pays the price for that. A century ago when the elderly fell sick and died, they would have done so within the prism of their family. Now that family structure no longer exists.” 3

Doctors, social workers, social service agencies and any other representative from the worlds of healthcare and community services were also notably absent. Georges and Anne were certainly resistant to outside help, but resistance cannot absolve the network of services that should have played a role in this couple’s lives. The isolation faced by Georges and Anne was nearly complete. Beyond a neighbor stopping by with groceries occasionally and a home aid who helped early in Anne’s illness, there was no one to notice that their lives were falling apart.

Georges and Anne’s story is moving for so many reasons. Their collective decline and sense of loss are heart wrenching, their love and commitment inspiring. Judging Georges and his actions is a complicated task that raises profound questions. Regardless of one’s assessment of Georges, he and Anne should not have faced such challenges in isolation, which can deepen depression and contribute to decisions that are impulsive and irrational. With the proper interventions, Georges and Anne could have both received the support needed to make informed, ethical decisions and avoided abuse.

One Response to When “Amour” Leads to Elder Abuse: Portrayal in Film