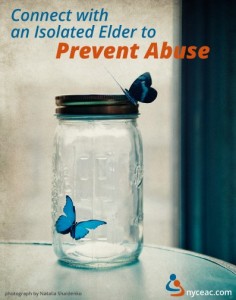 The 9th Annual World Elder Abuse Awareness Day (WEAAD) is June 15th. There are a number of events in New York, around the country and online to help raise awareness of elder abuse. Join in and take action to stop elder abuse!

This year, NYCEAC is using this graphic – designed by Nancy Oatts, a passionate elder justice advocate – to commemorate WEAAD and highlight the isolation faced by older adults, which increases risk for elder abuse. Breaking the silence about elder abuse, both by interacting with victims and families and with older adults in general, is critically important to ensuring that elder abuse is identified and prevented. We encourage you to share this blog and image as a reminder to connect with older adults and fight against elder abuse. For more information on how to help older adults expand their social networks, see our blog focused on Increasing Social Integration. 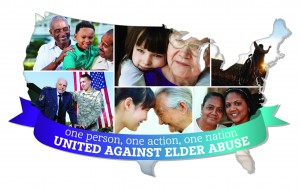 There are a number of ways to virtually participate in WEAAD:

The National Center on Elder Abuse (NCEA) is highlighting respect for older adults as a way to combat abuse and is asking people to share photos of older adults they respect and describe what they admire most about them using the  #WEAAD2014 #1U1ACT1NATION on social media channels.  You can also use these hashtags to discuss your events, activities, connect with others and to raise awareness about WEAAD and elder justice.

Ageless alliance is urging people to change their email signature font color to purple and add the tagline  “World Elder Abuse Awareness Day is June 15. One Person. One Action. One Nation.”

You can also join others in changing your Facebook profile and banner images to those commemorating WEAAD, such as the one created by NCEA and the Administration for Community Living.

WEAAD News & Activities Around the Country

NCEA is the main clearinghouse for World Elder Abuse Awareness day activities.  With the slogan “One Person. One Action. One Nation” their event locator provides information on activities and events happening around the country to raise awareness and combat abuse. In addition, they have provided many resources including a guide to faith communities.

A press conference to promote elder abuse awareness was held on the steps of city hall on June 11th at 11am.  Attendees were encouraged to wear purple in support of WEAAD.

The Community Agency for Senior Citizens held an event on June 12th to address elder abuse and abandonment by distributing materials and making staff available to help anyone over the age of 60 who believes they may be being intimidated, controlled or exploited.

The Weinberg Center for Elder Abuse Prevention at the Hebrew Home at Riverdale held an event on June 12th to raise awareness and understanding of elder abuse within the Hebrew Home community of residents and professionals. Their theme was the importance of being a good neighbor in combating elder abuse. The Weinberg Center team gave out information about elder abuse and tips on how to be a good neighbor to an older adult, as well as solicited tips from community members.

Dutchess County’s Coalition on Elder Abuse and the Mediation Center of Dutchess County will host their “Do Your Part- Engaging Generations- Building Communities Free of Elder Abuse” event on Friday June 13th.

In Rochester, the Adult Abuse Awareness Fair was held on June 12th and included resources and education for community members and the public.

In Syracuse, Vera House hosted a “Physical and Financial Fitness” program for seniors on June 11th.

Jewish Family Services of Ulster County hosted a panel discussion to promote a better understanding of abuse and neglect and to raise awareness of the underlying cultural, social, economic, and demographic issues.

Help Age International is starting an international campaign Age Demands Action (ADA) for Rights on World Elder Abuse Awareness Day.  This campaign strives to raise awareness of the abuse and violence older adults suffer from across the globe and is asking for governments to support a international convention on the rights of older persons. Many countries have planned events for this campaign.

Are you aware of other events that are not listed here? Please share them with us by emailing socialmedia@nyceac.org or Tweeting @NYCElderAbuse and we will update the blog to include additional events!