The Roadmap for Elder Justice: Priorities and Opportunities for the Field 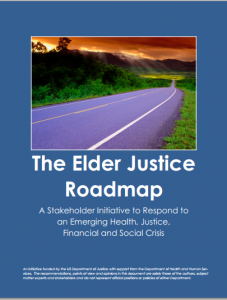 The Elder Justice Roadmap Project Report, released on July 9th, is a strategic planning document “for the field, by the field.” The result of a three-year process of interviewing and engaging 750 elder justice stakeholders from around the country, including direct service providers, policy workers, and government officials, the Report calls us all to action to pursue elder justice. The Elder Justice Roadmap Project was an initiative funded by the US Department of Justice with support from the Department of Health and Human Services.

The top 5 priorities are:

But the Roadmap has more than these top five priorities. Marie Therese Connolly – a co-author of the Report, an elder rights lawyer awarded a MacArthur Foundation Fellowship for her work on elder abuse issues – reflects, “Individuals, teams and entities at the local, state and national levels can adapt the roadmap based on their needs and resources – to raise awareness, identify priorities, engage new partners, design strategy, and implement concrete, achievable plans of action.  There’s something in the Roadmap for anyone who wants to reduce elder abuse.”

The Roadmap project will serve as both an incredible resource and opportunity for elder justice professionals and the field as a whole. “Given the scope and multifaceted nature of elder abuse, neglect, and exploitation, we thought it was critical not only to gather information from stakeholders around the country, but to distill that information in a concrete way that could be used by public and private entities, as well as by local communities and individuals, to help inform their efforts against elder abuse,” said Andy Mao, Coordinator, Department of Justice’s Elder Justice Initiative and the federal liaison to the Elder Justice Roadmap Steering Committee (along with Bonnie Brandl, Risa Breckman and Marie-Therese Connolly).

Bonnie Brandl, Director of the National Clearinghouse on Abuse in Later Life,  explained that the report provides “a crucial opportunity and responsibility to work together to implement these priorities on behalf of older victims.”

Added Breckman, Director, NYC Elder Abuse Center,“the elder justice roadmap is a call to action for all of those concerned about elder abuse, which this ground-breaking report reminds us ‘is a problem with solutions.’”

Click here to read the Elder Justice Roadmap Report. Comments and feedback on the Roadmap Report are welcome and should be sent to elderjusticeroadmap@gmail.com.

5 Responses to The Roadmap for Elder Justice: Priorities and Opportunities for the Field