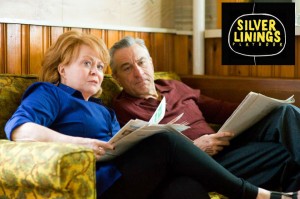 There are very few films that accurately depict the family dynamics when older adults are compelled to care for a child with mental illness. Unfortunately, these situations can and sometimes do turn abusive. While older parents are obviously well meaning, acting out of love and a sense of familial duty, they may not have the emotional, financial or physical resources to deal with someone with severe mental illness who is also demonstrating unpredictable and abusive behavior. At first blush, Silver Linings Playbook, a screwball comedy/kooky love story directed by David O. Russell (The Fighter, Three Kings) would seem an unlikely candidate to tackle this somber issue with temerity and a high degree of verisimilitude. And although Russell spends most of his time developing the mercurial relationship between his two romantic leads, so too does he convey the potential dangers that result when elderly parents are unable to care for their mentally ill children with impulsive, violent tendencies.

Family Dynamics & Evidence of Elder Abuse Presented in the Film

Bradley Cooper (Limitless, The Hangover) plays Pat Solitano Jr., a former substitute teacher from Philadelphia who is institutionalized in a Baltimore mental health facility after he discovers a colleague in the shower with his wife and beats the man to near death. Pat is diagnosed with bipolar disorder and medicated, although he spits out his pills when the hospital staff isn’t watching. Eight short months after his initial institutionalization, Pat’s mother Delores, nicely played by a very sympathetic Jacki Weaver (Animal Kingdom, The Five-Year Engagement) removes him from the medical facility, much to the protestations of the staff. They believe that while Pat has stayed the legally mandated eight months, he has not completed his treatment. No sooner have they left the hospital parking lot before Pat Jr. tricks his mother into smuggling out another hospital patient (Chris Tucker) and nearly runs her car off the road.

Things do not improve for the Solitanos after arriving home in Philadelphia. Pat’s father, Pat Sr. (a committed Robert DeNiro,) a financially strapped bookie with clear obsessive-compulsive tendencies, is perturbed to find his son released from the hospital so soon. Mrs. Solitano did not consult with her husband before releasing their son, mirroring the real world, as parents do not always agree on an approach to helping adult dependent children. She unilaterally and furtively made the decision to end Pat’s hospitalization because “Look at him. He’s ready.” This very quickly proves to not be the case.

The abuse suffered by Delores and Pat Solitano is due to their son’s uncontrollable explosiveness and their inability to fully treat him against his will. Pat’s first night home is spent reading Hemingway’s A Farewell to Arms (a misguided attempt to reconnect with his wife, a teacher, by reading her high school syllabus). That is, until he abruptly throws the book out a third-story window. He then bursts into his parent’s bedroom at 4AM, ranting uncontrollably about how unsatisfied he is with the book’s depressing ending. This is a fairly mild example of the discord between the Solitanos, a scene from which Russell more than anything intends to extract humor. However, it does demonstrate how completely unprepared the elder Solitanos are for handling Pat Jr.’s behavior and forecasts the probability of future altercations. Their bemused yet tolerant reaction to Pat’s outburst suggests they do not understand the severity of his illness. The elder Solitanos stipulate that Pat must attend therapy in order to live with them. They occasionally encourage Pat to take his medication but perfunctorily so, and they do not make it conditional.

Pat Jr. does not intend to take advantage of his parents, but that does not make the abuse any less real or damaging. This abuse manifests with different degrees of seriousness, from something as small as taking one of his father’s empty but precious-to-him money envelopes without asking to a violent bipolar episode culminating in physical assault and a police officer knocking at the front door. At this point in the film, it becomes very evident that the living arrangement in the Solitano household is untenable. Fortunately for the Solitanos, this incident convinces Pat to get serious about his medication. It is only then that Pat Jr. stabilizes his behavior and the abuse begins to abate. He winds up saving his father’s business and develops a loving relationship with the girl next door.

This glycerin Hollywood ending leaves us happy for the Solitanos, but should also remind us of an unfortunate reality: that no matter how good the intentions of the cared or the cared for, many older adults caring for dependent adult children with violent tendencies and improperly treated mental illness find themselves victims of abuse. Real life elder abuse victims and their abusers need intensive, expert help from knowledgeable professionals and an involved, aware community to find their silver linings.

Did you see Silver Linings Playbook? If so, what do you think? We want to hear from you! Please use the comment section below.