Public Service Announcements (PSAs) are tools that can be used to raise awareness and affect change. We have compiled some of the video, billboard, and radio PSAs that have already been developed and implemented. This list is not exhaustive and we encourage you to share additional resources in the comments section below.

Raising Awareness about the Prevalence of Elder Abuse

Visit Impact PSA for another announcement that brings focus to the general lack of knowledge about elder abuse.

There are many PSAs dedicated to raising awareness about all the types of elder abuse. Texas’ Department of Family and Protective Services has created sample radio announcements as part of their It’s Everyone’s Business Campaign. One example includes:

The National Crime Prevention Council has produced two PSAs: one on the problem of elder abuse and the other on spotting the signs of elder abuse.

You can find additional PSAs from the  Missouri Department of Health & Senior Services, the Tennessee Vulnerable Adult Coalition, the Texas Department of Family and Protective Services It’s Everyone’s Business Campaign, the NY State Office of Children and Family Services, and our elder justice allies down under at Melbourne Health. 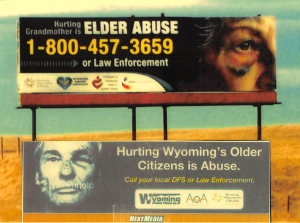 These billboards were featured across Wyoming and were developed by the Department of Family Services, Adult Protective Services, and the National Family Caregiver Program.

The Ontario Network for the Prevention of Elder Abuse uses this PSA to highlight physical abuse and the impact of elder abuse on children.

This advertisement features a California Assemblyman identifying some of the signs of physical abuse.

This advertisement from the Ontario Network for the Prevention of Elder Abuse focuses on verbal abuse and the impact of elder abuse on children.

Impact PSA created an announcement featuring caregiver burnout with the message that there is no excuse for elder abuse.

This advertisement from the Ontario Network for the Prevention of Elder Abuse calls attention to financial exploitation and the role other family members and caregivers can play in either intervening in abuse, or becoming complicit in the abuse.

The Ending Financial Elder Abuse Alliance has multiple PSAs available to help identify two of the most common: the grandmother and lottery scams.

The US Postal Inspection Office has a number of videos available that explain different types of scams and their response, which can be found on their website and on YouTube.

For other PSA resources, please visit the Center of Excellence on Elder Abuse & Neglect at the University of California Irvine School of Medicine and the Clearinghouse on Abuse and Neglect of the Elderly (CANE) at the University of Delaware Center for Community Research and Service.