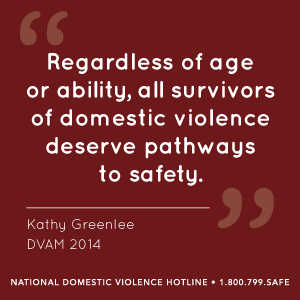 October was Domestic Violence Awareness Month and many organizations shined a spotlight on abuse in later life.

Say No More to Elder Abuse

The Eagle Tribune brought attention to the lack of reporting of elder domestic violence, and Huffington Post Canada featured an article on predatory marriages.

Kathy Greenlee, Assistant Secretary for Aging and Administrator of the Administration for Community Living (ACL) at the U.S. Department of Health and Human Services (HHS), highlighted the difficulties for older adults and adults with disabilities to gain access to domestic violence resources. Bonnie Brandl, Director of NCALL, joined Secretary Greenlee in the call for more coordination and collaboration among domestic violence and sexual assault advocates and elder justice providers.

The National Council on Crime & Delinquency created a new online archive of several APS Research to Practice webinar series videos, which have been sponsored by the National Adult Protective Services Association and National Committee for the Prevention of Elder Abuse Research Committee.

The New York Asian Women’s Center (NYAWC) seeks a Later in Life Program Coordinator who will spearhead NYAWC’s effort to provide leadership in ensuring that the issues, concerns, needs and problems of Asian and Asian American abused older adult survivors are adequately addressed.

Sign up now for The National Center for Victims of Crime’s webinar series “Recognize, Report and Recover,” dedicated to responding to elder financial exploitation, with installments for four Fridays in November and December.

Learn more about Catherine Christian, the new chief of the Manhattan District Attorney Office Elder Abuse Unit from the New York Law Journal article featuring her transition to this position.

The Pope Speaks Out Against Elder Abuse

This month the Pope spoke out against elder abuse in a speech made to older adults assembled in Vatican Square. “Violence against the elderly is as inhuman as that against children,” Pope Francis said, “How many times are old people just discarded, victims of an abandonment that is tantamount to hidden euthanasia.”

The White House Conference on Aging

The ACL has reorganized to better align missions and incorporate the Paralysis Resource Center and the State Health Insurance Assistance Programs (SHIP). The new structure includes an expansion of the Office of Elder Rights to the Office of Elder Justice and Adult Protective Services.

The Department of Justice has released the summary from the Elder Mistreatment: Using Theory in Research meeting held in June of 2014. The meeting resulted in the development of 25 recommendations to increase the use of theory in elder justice research.

The Minnesota Elder Justice Center has opened and unites and expands the work the Vulnerable Adult Justice Project and Stop Abuse and Financial Exploitation (S.A.F.E.) Elders and will work to build public awareness, deliver professional education and inform public policy. Email Iris Freeman at iris.freeman@wmitchell.edu or Amanda Vickstrom at amanda.vickstrom@elderjusticemn.org for more information.

Los Angeles received a $1.6 million grant from the Department of Justice and Verizon Corp to train police officers to recognize the signs of elder abuse.  This training requirement will be expanded state wide since two McGeorge Law School students at University of the Pacific drafted legislation that was passed into California law which will mandate that police officers receive training within 18 months of field placement.

Sarah Cheiker was living alone in California when she vanished and four years later she was found alone, living in squalor in a cabin in a remote area of Maine. Ms. Cheiker was the victim of a severe case of financial exploitation, neglect and abandonment and now lives in an assisted living facility in Maine.