New York State Doesn’t Have Mandatory Reporting: Good or Something to Change?

Mandatory reporting of elder abuse has a history of drawing heated debate. However, over time, every state except New York and Pennsylvania have passed legislation mandating professionals to report community based elder abuse, neglect and exploitation. (New York State requires that Adult Protective Services (APS) workers report suspicions of abuse to law enforcement, but there are no laws mandating reporting from other professionals or lay persons, and the mandate for APS dictates only that they must make a report. There is no obligation on the part of law enforcement to investigate reports from APS. In the context of the national conversation about mandated reporting, this requirement for APS does not confer the status of “mandatory reporting state” upon New York State. Additionally, certain residential health care facilities are mandated to report.) Thus, New York State is part of the final frontier for this debate.

In Support of Mandatory Reporting

There are many reasons that victims of elder abuse cannot or do not seek help, including isolation, fear of retribution, and inability to advocate for themselves due to cognitive and/or physical impairments. Elder abuse victims also may not recognize the severity of and risk for danger present in their situation, which could stem from the impact of long-standing trauma, ambivalence or diminished capacity. Mandatory reporting laws are arguably designed to initiate the potentially life-saving process of interventions for these hidden victims.

Mandatory reporting laws “require individuals to report certain injuries or cases of abuse or neglect to law enforcement, social services, and/or a regulatory agency.” (“Mandatory Reporting.” Mandatory Reporting. National Clearinghouse on Abuse in Later Life, n.d. Web. 18 Dec. 2014.) Such laws were first introduced in the 1970s by the child abuse field and in more recent years have been used to protect other vulnerable populations, including older adults. Mandated reporters can include professionals working in health and mental health settings, educational environments, criminal justice and institutional and nursing home settings, civil lawyers, bank employees and others.

Laws requiring mandatory reporting vary from state-to-state but have gained wide support because it is believed that these measures improve the way states respond to elder abuse. Arguments in favor of mandated reporting legislation in NYS include, but are not limited to, the following:

While the ultimate intent of mandated reporting laws – to improve each state’s response to elder abuse – is in tune with the values of everyone working towards elder justice, some professionals argue that the legislation and arguments above have serious limitations. Skeptics of traditional mandatory reporting laws want the state to move towards a person-centered response to elder abuse, neglect and exploitation. Advocates of this perspective raise many important concerns about mandatory reporting, these among the most significant: 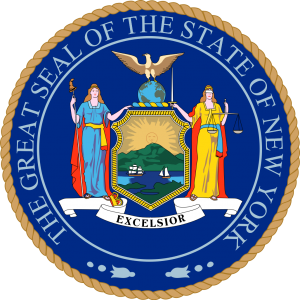 Seal of the State of New York courtesy of Wikimedia Commons.

As evidenced above, mandatory reporting is a complicated issue, and the impact of legislation in this area can be serious and far-reaching. New York State needs elder justice professionals and advocates – and professionals across disciplines and systems, and the public – to join in the conversation and contribute perspectives.

Additionally, academics in New York State and elsewhere should pay keen attention to the opportunity New York State presents – as the one of two states left without a law mandating professionals to report – to study the contested elements of reporting. Collectively with policy makers, there is potential for a great number of opportunities to bring expanded safety and dignity to older New Yorkers across the state.

What do you think about mandatory reporting and the innovative ideas being discussed in NYS? Please join the conversation!

Related Stories:
News & Resources Roundup: November & December 2014
Elder Justice Advocacy: Where We Have Been & Where We Are Going
Are Cameras in Nursing Homes to Document Elder Abuse a Good Idea?

7 Responses to New York State Doesn’t Have Mandatory Reporting: Good or Something to Change?