It Became Love: One Advocate’s Journey into the Elder Justice World

This blog discusses how a multi-talented designer, writer, and artist became a passionate elder abuse advocate. Nancy Oatts was kind enough to sit down with The NYC Elder Abuse Center’s (NYCEAC) Talitha Guinn for an interview about her personal experience encountering elder abuse, the surprising journey on which it led her, and hopes for a future where elder abuse is mitigated through the relationships that are built between neighbors.

When Nancy Oatts, noticed that her elderly neighbor, Miss D, was beginning to show signs of cognitive decline and neglect, she decided to get involved, and her life was never the same.  Nancy began spending time with Miss D, helping her tend to suddenly overwhelming aspects of her daily life. As a result, a trusting friendship grew between them.

“People think that I gave her so much of my time and made so many sacrifices, even of a financial nature, but what they don’t understand is that what I gave to her is nothing compared to what she gave to me.”

When it became apparent that Miss D. was being financially abused and neglected by her son, Nancy took action by calling the local council office and following their advice to make a report to Adult Protective Services. Miss D’s abuse may have gone unnoticed if not for her relationship with Nancy.  Many older adults suffer in the shadows, their plight going unnoticed in a society that so little values aging that elders often become almost invisible.  This social isolation is a risk factor for elder abuse.  Through the simple act of forming relationships with our older adult  neighbors, we can help reduce the chance that they will be abused, and intervene on their behalf if it becomes apparent that abuse has occurred.

“People don’t have to become as involved as I did, but everyone can do something.”

Nancy experienced the power of forming such a relationship and her experiences with Miss D had a profound effect on her.  After seeing elder abuse from the inside, she decided to employ her many talents in raising awareness about elder abuse with the goal of inspiring the public to take action on this issue.  Nancy began blogging about her experiences with Miss. D, the highs and lows, hopes and fears, and the many complications that occurred on their journey are woven into an inspiring and highly relatable storyline.  Her blog went on to win the, Very Inspiring Blogger Award, and deservedly so, however, winning awards was never her goal.  Her goal was and is to help other people learn about elder abuse, so that our neighbors don’t have to suffer needlessly around us. 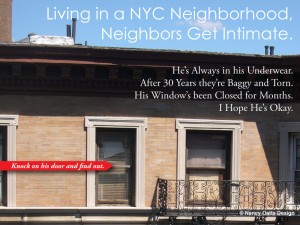 Nancy, a retired toy designer, is also a graphic designer, and when she observed that there was relatively little public awareness material on the issue of elder abuse, she decided to create targeted graphic campaigns. She became involved with NYCEAC and designed and contributed those designs to the Center’s outreach efforts.  The graphic that opens this blog, Elder Abuse Hurts, is her design.  Another campaign that she developed, The Good Neighbor Campaign, features several graphics to inspire action at the community level. Above is an image of an apartment building with a narrative drawing one’s attention to the many ways a neighbor has changed – all red flags of abuse or neglect, and urging the reader to inquire about the well-being of their aging neighbor.  To her, being a good neighbor is something that all of us can do, and elder abuse prevention can begin with something as simple as knocking on your neighbor’s door.  Her designs are sometimes subtle and sometimes jarring, but always provide a call to action.

“I noticed more of our neighbors avoiding Miss D. It was uncomfortable to see her struggle and it was just a matter of time before something bad happened to her. I wanted this public service campaign to be jarring, to shake a person into action or at least awareness of Elder Abuse. “

Action is what Nancy is all about, and her hope is that we will each begin to see ourselves as a sentinel, a guardian, of the older adults in our community and take action to protect them.  In the case of Miss. D., the abuse and neglect that she had endured stopped.  After a stay at the Harry and Jeanette Weinberg Center for Elder Abuse Prevention’s emergency shelter program, she was able to return home with the care that she needed, living in her longtime apartment until she passed away, as was her wish.  Though complicated, Nancy encourages all of us to get involved in the lives of the abused and neglected because there is so much good that can come from that engagement. 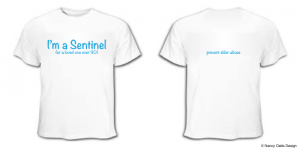 Throughout our conversation, and on her blog, Nancy emphasizes the richness that came into her life when she befriended Miss D.  She stresses that being a good neighbor is not only valuable to the community, but immensely rewarding for the person who is acting out of kindness.  In fact, recent research validates her experience; the more kindness we show, the greater happiness we experience. Talk about a win-win.

“In the beginning I was just being a good neighbor,” says Nancy.  “What was it in the end?” I asked.  Nancy: “It became love.” 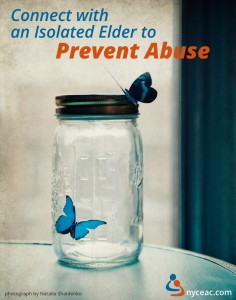 LOOKING TO BE A GOOD NEIGHBOR?

Here are some resources to help you help the older adults in your life.

Find the Adult Protective Services office near you

Find support and resources at the Family Caregiver Alliance

Connect with us at the NYC Elder Abuse Center

2 Responses to It Became Love: One Advocate’s Journey into the Elder Justice World