Nora Moran is a recent graduate of the Silberman School of Social Work at Hunter College, and completed research about the intersections of domestic violence and elder abuse as part of her Professional Seminar course. She is interested in the intersection of age and gender, and how such identities impact older women. In this blog, she describes the ways that age and gender can affect elder abuse and its interventions. Nora can be found on Twitter at @nk_moran, or on LinkedIn here.

A tragic story recently made headlines in New York City: “Man killed wife for making vegetarian dinner.” A man beat his wife to death after she made him lentils for dinner, though he wanted lamb. What this headline did not capture was age; the husband was 71 at the time of the homicide. The wife was 66. Prosecutors believed that this was not a one-time occurrence, but rather the culminating incident in a pattern of abuse.

Though we do not know all of the specifics about the case, a few key issues are playing out here—power and control, gender dynamics, age, the compounded effects of long-term abuse, and culture, just to name a few. As a social service and elder justice professional out in the field who might encounter such a case, would we consider this incident to be intimate partner violence (IPV) 1 or elder abuse – or both? Coordination and dialogue between elder justice professionals and IPV professionals will be essential to increasing our own understanding of violence and abuse later in the lifespan, and to developing responses that are most relevant to older adults in these situations.

IPV, which is typically defined as a pattern of abusive behavior used by one intimate partner to gain power and control over another intimate partner, and elder abuse are often treated as two separate issues, with different histories and foci informing interventions and care. For example, the IPV field – also known as the domestic violence field – started out as a grassroots movement. The abuse perpetrated was conceptualized as tactics utilized by a (usually) male abuser to maintain power and control over a (usually) female victim younger than 55. Safety and criminalization/abuser accountability were central in the conceptual framework. In contrast, the elder abuse field grew up largely (though not exclusively) through the aging network. A professionally led field, the initial focus was on caregiver stress – with females largely being the caregivers – as risk factor for abuse, with victims being male and female, over the age of 60 or 65.

Understanding these different perspectives and blending them has emerged as an important goal as late life abuse cuts across both fields of expertise. Indeed, the National Center on Elder Abuse encourages professionals to consider IPV in later life as a unique sub-type of elder abuse.

Bonnie Brandl and Loree Cook-Daniels, interested in this intersection, conducted a review of 54 studies about age and domestic violence published between 1988 and 2002. They were unable to compare results across studies as the definitions of abuse and reporting measures varied widely and most of the studies were small in scale. But their review of the studies helped identify a number of important issues underpinning domestic violence in later life, including incidence and prevalence, abuse types, culture, relationships and more.

The issue of “categorization” between IPV and elder abuse may seem insignificant. After all, abuse is abuse and professionals in both the IPV and elder abuse fields are focused on protecting victims. But it matters greatly when safety planning, designing an intervention strategy and delivering services. Consider how interventions are shaped if an intersectionality lens is not utilized. From an IPV perspective, events later in the life course impacting abuse dynamics – e.g., services not designed to address the unique housing, health care, financial and social needs of older adults or those experiencing cognitive and/or functional impairments – may be overlooked. But if only an aging perspective is utilized, the power and control dynamics that are central to the victim’s experience and critical to safety planning might go unaddressed. Kilbane and Spira (2010) discuss some of the implications that each perspective can have on an individual seeking help.

Gender might also go unaddressed, and this is important because gender may be at the root of these power and control dynamics that a victim experiences. Though the scope of elder abuse is broader than IPV, and encompasses more types of abuse as well as perpetrators, women are still impacted by elder abuse at higher rates than men. This was recently found in “Under the Radar:New York State Elder Abuse Prevalence Study.” The study had two components: a self-reported study in which a sample of adults aged 60+ were asked to complete a survey about elder mistreatment, and a documented case study in which New York State professionals working with victims of elder abuse and domestic violence were surveyed about their caseloads in the year 2008. In the self-reported study, 64% of respondents who said that they experienced abuse were female. A spouse or partner was the most commonly identified abuser. In the documented case study, 67% of the victims were female, and 66% of the abusers were reported as male. 26% of the abusers were the victim’s spouse. 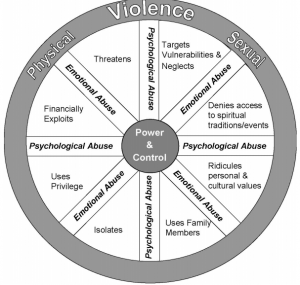 This is not to downplay the impact of elder abuse on both men and women, nor is it a reason to discredit the experiences of men who have experienced abuse. Rather, we can consider how rigid gender roles might contribute to abusive situations. For example, some men’s abusive behavior is connected to rigid beliefs about masculinity and learned behaviors emphasizing aggression as a way to assert themselves and their masculinity. Some women might opt to stay in an abusive relationship because of powerful, societally enforced beliefs that it is her responsibility as a wife (and if she has children, mother) to keep the family together even in the face of danger and suffering. Some abused older women came of age and married at a time when IPV was not recognized and thus may not have a full understanding of what services and supports are available today. Or, after having been emotionally worn down from years of abuse, may find even imagining a life without abuse quite difficult. Even though elder justice professionals view elder abuse through the primary lens of age and experiences later in the life course, it is important for gender issues to be explored as well.

Increased coordination between professionals working with elder abuse programs and those working with IPV programs is essential to providing effective interventions to IPV victims in later life. Rather than narrowing the focus to either IPV or elder abuse, it is important to maximize services from both areas, and ensure that both are partnering to meet the unique needs of older women.

Those working in the elder justice and IPV fields must be willing to grapple with these issues and have a dialogue about reducing silos which have a negative impact on victim service provision. The report, Vision 21: Transforming Victim Services encourages this conversation. The Elder Justice Roadmap Project Report also calls for this kind of collaboration as a key part to raising awareness about and addressing elder abuse. Forming coalitions, hosting cross-agency meetings, sharing trainings and resources, and participating in case conferences are all ways that professionals can learn from each other and gain a greater understanding of abuse throughout the lifespan. We need to understand both paradigms so that we can maximize protections for all abuse victims.

Fostering a Dialogue & Working Together: Elder Justice Professionals & Police Officers
Roadmap for Elder Justice: Priorities and Opportunities for the Field