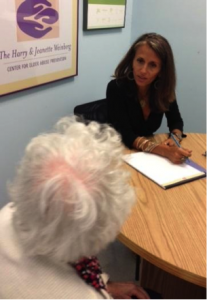 Joy Solomon, Esq, is the Director and Managing Attorney of The Harry and Jeanette Weinberg Center for Elder Abuse Prevention, the nation’s first emergency shelter for elder abuse victims. She co-founded The Weinberg Center in 2004 and was was previously Director of Elder Abuse Services at the Pace Women’s Justice Center. Prior to joining the Women’s Justice Center in 1999, Joy investigated and prosecuted a variety of crimes including child abuse, fraud, and elder abuse as an Assistant District Attorney in Manhattan. Joy is a frequent speaker on the issue of elder abuse, including to the United States Senate, Special Commission on Aging.

In this blog Joy discusses the importance of recognizing and supporting older adults’ intimate relationships and marriages and tells a story about a couple that was victimized by their son and moved into The Weinberg Center’s shelter where they received services as a couple. All identifying information and case facts have been revised to protect confidentiality.

The “Modern Love” column in the New York Times recently featured a moving essay and accompanying animation describing the joys and complexities of finding romantic love in later life. Our culture seldom acknowledges that older adults seek out and desire romance, partnership and sexuality in later life, which makes it difficult for older adults to feel that society values and acknowledges their intimate relationships. This cultural context impacts situations where two older adults, who are partners, dating or married, experience elder abuse at the hand of a family member or someone close to them. As a result, when responding to such cases of elder abuse, it is crucial to preserve a couple’s relationship, which can be an integral part of preserving their dignity, independence and physical health.

The Harry and Jeanette Weinberg Center for Elder Abuse Prevention at the Hebrew Home at Riverdale recently dealt with this complex issue when, for the first time, admitting a married couple, Sam and Diane, into their shelter. Sam and Diane were in their nineties and had been married for over seventy years. Sam’s health had been declining for several years, yet the couple remained committed to staying together in the Manhattan apartment they lived in since the 1970s. This deep desire to continue their life together as a couple persisted even as Diane’s failing health made it increasingly difficult for her to care for Sam, causing him to be hospitalized three times in a six month period. When Sam and Diane’s son John offered to move back home to care for them, the couple hoped that this was the solution to their problems. Instead, John neglected his parents’ care and slowly drained their bank accounts.

Though Sam and Diane had the resources to pay for the home care that would help preserve their independence, hearing impairments made it impossible for them to know when much needed help had arrived. John reassured them after each subsequent hospitalization that he would make sure that services were able to access the home, but never did so. Sam and Diane were left alone in their apartment and unable to access help, even when it was waiting just outside their door. Sam and Diane were trapped in a world that contained only the two of them, and at this point, two was just not enough. Ultimately, Adult Protective Services found them in deplorable conditions, filthy and without food and essential medications, and moved them to a nearby hospital.

When working with older adults who are struggling to recover from the trauma of abuse, preserving and respecting relationships is critical. – Joy Solomon

When the hospital notified The Weinberg Center about Sam and Diane, our shelter seemed like the perfect place for them to continue their journey together. The Hebrew Home has long been at the forefront of advocating for older adults’ right to intimate relationships, having been the first long-term care facility to adopt a sexual expression policy in 1995. Sadly, not all nursing facilities share this attitude, and the fear of being separated is added to the endless laundry list of reasons that prevent couples who’ve experienced elder abuse from speaking out about the abuse they’re facing.

The Weinberg Center team was committed to proving to Sam and Diane that this one fear, at least, was unfounded. Sam and Diane came to our shelter together, and shared a private room. They have been able to participate in Hebrew Home programming that is available to all shelter clients. They can also take advantage, as a couple and individually, of therapeutic activities that will help them move past their abuse and enjoy their present together and plan for a shared future. In addition, The Weinberg Center’s multidisciplinary team of lawyers and social workers strategize with them about the best way to reclaim their financial independence, organize their assets and plan for how to best utilize those assets to receive the care they need.

Strong, nurturing spousal relationships have been linked to increased happiness and perceived physical health as people age. The Weinberg Center and the Hebrew Home, both individually and as partners, have prioritized the celebration and protection of these relationships, and Sam and Diane’s shared future is brighter because of that commitment.

Are you aware of other shelters or elder abuse programs that are meeting the unique needs of couples who have experienced elder abuse? Please share in the comments section of this post so we can highlight the great work happening in the elder justice field.