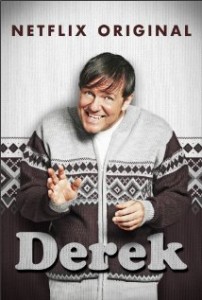 The essential absence of older adult voices in mainstream media is a product of our ageist society and exemplifies how ageism obscures the value of older adults. Age segregation compounds the effect of this public absence by limiting opportunities for intergenerational engagement in our daily lives.

Derek exposes us to many positive aspects of relationships with older adults through title-character Derek’s (Ricky Gervais) work at Broad Hill nursing home. His heartfelt interactions and relationships with co-workers and residents drive the plot of this “mockumentary” style comedy. Though dysfunctional at times, Ricky Gervais’ crass humor is softer in Derek than The Office, but still very much present. This community is full of love and Derek’s behavior illustrates how much he cares about the residents. Derek engages in meaningful friendships with residents and draws strength from these relationships. He has favorite routines with many residents such as his weekly lottery playing with Joan.

A show like Derek can help reduce ageism simply because it provides exposure to older adults. Connecting personally to the many affable characters in Derek helps viewers bridge the divide between generations and realize the value of older adults in their own lives. Derek cast member Brett Goldstein captured well the ability of the show to provide exposure to older adults and overcome the barriers of age segregation:

I think [the show] helps us reassess our view of old people. One of the treats of making Derek is that I get to hang out all day with old people. That’s not something I’ve done a lot. … There are not many opportunities for different generations to mix.

Nursing homes residents represent a small slice of the broader older adult population but the prominence and diversity of older adult characters throughout Derek is unique. It allows viewers to see that there is as much variety in personality, opinion, and capability amongst older adults as any other age group. Because Derek has a deep sincerity within its comedic trappings, it often gives emotional depth to the experience of aging. For example, one episode in Season one focuses on Broad Hill resident Lizzie’s decline from Alzheimer’s Disease. Her husband offers a moving history of their life together and the joy that it continues to bring him.

As an undergraduate student who interned with the NYC Elder Abuse Center’s Risk and Resiliency Internship Project, I recognize the need to take advantage of all opportunities to fight ageism. Loudly broadcasting the reality that older adults are abundant sources of strength, wisdom and fascinating stories helps more people recognize the value of older adults. The more this message is shared, the more inclined people will be to protect older adults and join the fight against elder abuse.

Derek demonstrates that television and other media can be an important means of spreading much needed anti-ageism messages to large audiences. Incorporating more older adults into the lives we watch can increase the connectivity younger generations feel towards older adults. The hope is that once members of society view aging as just another part of life and internalize the inherent value of older adults, they will feel an urge to further connect with older adults and pay more attention to the need to fight elder abuse.

Seasons one and two of Derek can be streamed on Netflix and season three is currently in production. Gervais was nominated in 2014 for an Emmy Award.