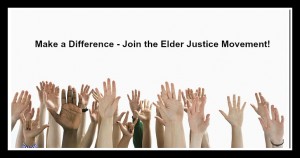 Many professionals – including doctors, nurses, lawyers, social workers, adult protective service workers, and others – work diligently to prevent and respond to elder abuse. Some work directly with older adults to ensure they are safe and free from abuse and others focus on research, education or advocacy to build knowledge, awareness and to effect policy change. Because no one discipline, organization or service system “owns” this work, professionals collaborate with each other to improve the safety, health and well-being of older adults. This collective effort of many committed professionals across the country has created the foundation for the elder justice movement.

The Elder Justice Movement is in Motion

Leaders and professionals working in the field have recently begun referring to the elder justice field as a movement, which highlights the organization and momentum the movement is gaining.  This language is used during presentations and in materials developed for conferences, summits, media relations and proposals. The elder justice movement now has representation inside and outside of government and throughout the country. The field is mobilizing by seeking public awareness, prevention and response programs, research, legislation, national leadership and an increased investment through public and private funding.

Goals of the Elder Justice Movement

Elder justice leaders and advocates are developing and fine tuning goals for the elder justice movement. An ongoing goal has been to advocate for increased appropriations for the Elder Justice Act. In addition, The United States Department of Justice and Administration for Community Living has convened a group of elder justice experts to develop an Elder Justice Roadmap. True to the rich partnerships that are a cornerstone of this work, the development of the Roadmap is a collaborative effort, which will result in priorities, direction and momentum for the elder justice movement.

We Need You to  Actively Participate in the Elder Justice Movement

Now that elder justice movement has gained momentum, we must continue raising awareness by educating policy makers, the general public and professionals, in aging and other fields, about the reality and severity of elder abuse – and we must work to prevent it. To do this, the movement must assiduously work to include the voices of older adults and older victims – and their non-abusing family and friends.  Click here  to hear victims speak.

We can do this!

To accomplish this, we need to:

We must keep our eyes fixed on raising awareness and building partnerships with other service systems to establish our presence and continue fighting against elder abuse.   Together we can make a difference in the lives of older adults!