Thank you for #CounteringIsolation: Results

Family gatherings are more commonplace in December, and older adults without families can experience more acute social isolation. Since isolation is both a risk factor for and a consequence of elder abuse, we decided to ask you – our social media followers and colleagues – to commit to speaking with an older adult in December. Our hope was that, by sharing this campaign, we could support older adults and contribute towards the prevention of elder abuse during the 2017 holiday season.

Our social media community is strong and powerful!

The December #CounteringIsolation social media campaign exceeded all expectations, most importantly sharing the important message that older adults face social isolation during the holiday season. As a result of your efforts, you shared over 400 commitments to having a conversation with an older adult in December. 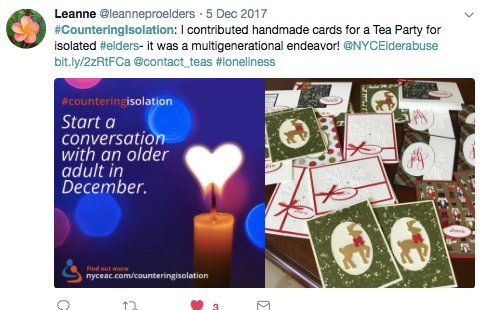 Our other social media posts about older adult isolation, elder abuse, and the importance of community were shared by 200 and reached approximately 4,000. 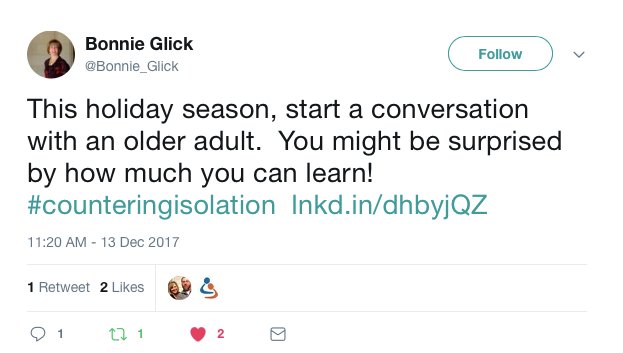 Thank you to our partner organizations who also shared our posts, our greater community that cares, and to YOU for supporting the NYC Elder Abuse Center’s #CounteringIsolation campaign, some of which are included below. 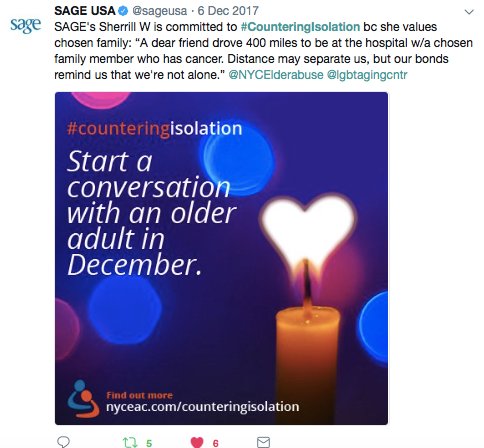 This campaign was an experiment and a pilot. We were thrilled with the response, and excited that we began a national conversation about isolation and risk of elder abuse. From everyone at the NYC Elder Abuse Center, thank you for reaching out in December to an older adult and #CounteringIsolation.

2 Responses to Thank you for #CounteringIsolation: Results