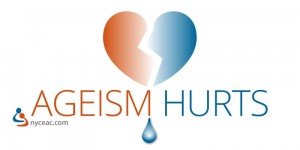 The following are ageism focused resources. If you would like to share on this page a news item or resource that counters ageism, please send the request to info@nyceac.org or via NYCEAC’s Twitter, Facebook, or LinkedIn. Click here for more information on our countering ageism initiatives.

The following pieces were featured online by traditional and non traditional media sources.

These video resources come from many sources but each either highlight positive role models in aging or anti-ageism work.

This section provides links to articles and groups that call for recognition of ageism and change to help counter it.

The following organizations are committed to combating ageism.

These training resources provide professionals with tools to combat ageism and to interact with special populations of older adults.

The term ageism was first coined by Bob Butler in 1969 in the Gerontologist.  See this classic article and others from researchers working to combat ageism.