On October 26, 2017 · Add Comment
We are delighted to announce the fifth anniversary of NYCEAC’s Elder Justice Dispatch Blog! A tradition we started four years ago is to summarize a number of blogs from the past year and provide links to them for further reading. This year’s anniversary edition – NYCEAC’s Blockbuster Blogs from July 2016-June 2017 – features eight selected blogs covering a wide range of elder justice issues – from abuse in Latino communities to spotlighting the work of elder justice advocates.
Celebrating World Elder Abuse Day: June 15th, 2017

Elder abuse is not just limited to the United States. This year, NYCEAC celebrated World Elder Abuse Awareness Day, June 15th, 2017, by highlighting organizations, campaigns, and efforts around the world dedicated to helping older adults and preventing elder abuse in the article World Elder Abuse Awareness Day 2017: Elder Justice Worldwide. The article contains a list of 11 organizations in 11 different countries that are working on elder abuse issues through policy, education, research and services, exemplifying that fighting elder abuse is truly an international movement.

Spotlights: Elder Abuse in the Media 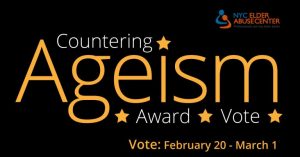 This blog, Ageism in Film and The Countering Ageism in Film Award, discusses ageist stereotypes which are perpetuated by Hollywood’s youth-oriented film industry.  A study done by the University of Southern California found that these stereotypes hinder our understanding of aging, older adults, and the vast experiences of olderadults. As a response to the misrepresentation and negative stereotypes of older adults in film, NYCEAC created the Countering Ageism in Film Award, allowing voters to choose their favorite positive portrayal of an older adult in a 2016 film. The winner? Denzel Washington for his portrayal of Troy in the film “Fences.”

Social media has created a new platform for elder abuse. The article Keeping Elder Abuse Images off of Social Media: A New Front for Advocates questions the role social media companies should play in combatting this issue. Additionally, Hannah Jacobs, the co-founder of Family Members, a 501c3 organization dedicated to eradicating hateful speech that targets people with special needs and disabilities, discusses how to prevent elder abuse images from being shared on social media.
Elder Abuse in Latino Communities 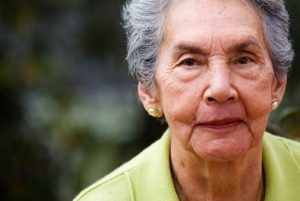 The blog, Understanding the Ins and Outs of Guardianships, provides detailed information regarding guardianship laws, also referred to as conservator laws. These laws are in place to protect adults who are unable to make decisions for themselves, such as medical and financial decisions. Through a legal proceeding, a court can appoint a guardian to assist individuals found to be incapacitated, i.e., when the individual can no longer manage their own care and management of their finances.

A Powerful Pair:
The Brandl-Crockett Alliance 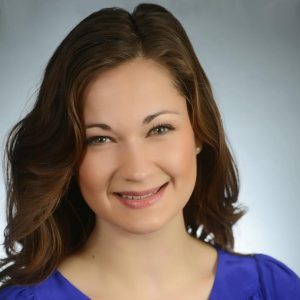 The Brandl-Crockett Alliance: Combining Forces to Advocate for Older Women sheds light on a powerful intergenerational pair, collaborating in the fight for social justice for older women. Bonnie Brandl and Cailin Crockett are two leaders in the cause to end violence and abuse against older women.
NYS Elder Abuse Service Gaps, Barriers & Solutions:
A Report of Findings 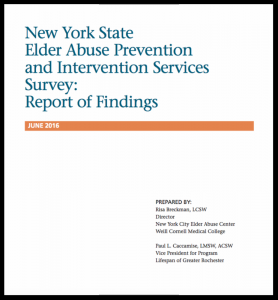 This blog, NY State Elder Abuse Prevention & Intervention Services Survey: Report of Findings, summarizes the results of a survey that assesses the current adequacy of elder abuse victim prevention and intervention services around New York State. The survey was developed by the NYC Elder Abuse Center (NYCEAC) and Lifespan of Greater Rochester, Inc. The full report can be accessed through this blog.
The Risk and Resiliency Internship Project Elder Abuse and Older Adults with Intellectual and Developmental Disabilities