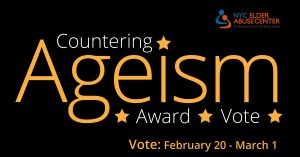 Read further down about the Countering Ageism in Film Award.

Why so little silver hair on the silver screen? A study at the University of Southern California Annenberg School of Communications and Journalism found 11% of characters in the top 100 grossing films of 2015 were over the age of 60, despite comprising 18.5% of the general population. The problem is far worse for older women who are frequently absent from movies all together. 78% of these films had no older females characters in leading or supporting roles.

When older adults are cast, one-dimensional and stereotypical characters are commonplace. The USC study found that 29% of older adult characters engaged with modern technology, while 84% of older adults say they use the Internet weekly. And of the 57 films with an older adult featured in a leading or supporting role, over 50% of these characters were referred to in derogatory ways, for example, being called “a relic,” “a frail old woman” and “a senile old man.” This Hollywood characterization does not match older adults’ self-perceptions: according to Humana’s quantitative survey, older adults self-report as being highly aware (95 percent), resilient (91 percent) and physically active (71 percent).

The USC study notes, “Ageist comments appeared in slightly more than half of the films with leading or supporting senior characters…The ageist comments identified in this sample would certainly be unacceptable were they referencing another marginalized group. Even more importantly, viewing such comments may have deleterious effects on some audience members.”

The Countering Ageism in Film Award

As a response to the misrepresentation and negative stereotypes of older adults in film, NYCEAC created the Countering Ageism in Film Award. Our award is for the “Best Portrayal of an Older Adult in Film.” This contest aims to highlight the importance of portraying strong older adult characters in film.

The best part is that YOU decide who receives this award. We’ve uploaded a simple voting app to our Facebook page, which takes seconds to complete. What was your favorite positive portrayal of an older adult in a 2016 film?

Voting opens February 20 and closes March 1, 2017. The winner will be announced on NYCEAC’s Facebook page on March 2nd.  Vote today on Facebook!

Nominees for the “Best Portrayal of an Older Adult in Film”

Sally Fields for her role as Doris in “Hello, My Name is Doris”

Meryl Streep for her role as Florence in “Florence Foster Jenkins”

The story of a New York heiress, played by Meryl Streep, who dreamed of becoming an opera singer, despite having a terrible singing voice

Denzel Washington for his role as Troy in “Fences”

A working-class African-American father, played by Denzel Washington, tries to raise his family in the 1950s, while coming to terms with the events of his life.

Tom Wilkinson for his role as Richard in “Denial”

Tom Wilkinson plays Richard Rampton, a libel attorney who represents a historian who must battle for historical truth to prove the Holocaust actually occurred when a renowned denier sues her.

John Goodman for his role as Howard in “10 Cloverfield Lane”

After getting in a car accident, a woman is held in a shelter with two men, who claim the outside world is affected by a widespread chemical attack. John Goodman plays Howard, one of the men.

Krisha Farchild for her role as Krisha in “Krisha”

Krisha, played by Krisha Fairchild, returns for Thanksgiving dinner after ten years away from her family, but past demons threaten to ruin the festivities.

Helen Mirren for her role as Col. Katherine Powell in “Eye in the Sky”

Played by Helen Mirren, Col. Katherine Powell, a military officer in command of an operation to capture terrorists in Kenya, sees her mission escalate when a girl enters the kill zone triggering an international dispute over the implications of modern warfare.

We are pleased to announce the winner of the Countering Ageism in Film Award! 400 social media fans and stakeholders visited the voting site, awarding the honor to Denzel Washington for his portrayal of Troy in the movie “Fences.” Troy is a multidimensional character who suffers from tragedy and familial drama, and he represents one of the many diverse stories older adults have to tell. Mr. Washington’s character transcends many negative stereotypes of older adults we see in films, and we are pleased to honor this fine portrayal of a complex older adult in film.